I haven't been sewing very much this week but more on that later. Right now I am trying to 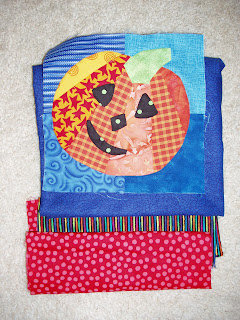 make up my mind on a small Halloween table runner. It was a free pattern given out at least ten years ago by my LQS. I made one in homespun sort of colors for a silient auction and then put the pattern in with my Halloween fabrics promising to make a bright one for myself one day. I just can't seem to make up my mind on the sashing and border.


The first one has the pumkin blocks floating on blue sashing with a thin black stipe inner-border and then a wider red border. (I've also played with making the red border orange...?) 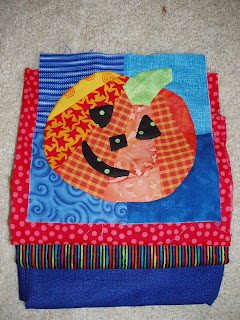 The second option is to use the red as the sashing with the think black stipe inner border and then a wider crackle blue border. (There are three jack-o-lanterns on this table runner...)

I'm making it for my sister in N.M. My niece and nephew have birthdays on either side of Halloween. I've made a halloween quilt and pillowcases. So this is my project for this year. I know I should just pick one and get going but I thought taking photos and stepping back may help me....now I'm not so sure!

Anyway, back to the why no sewing. The weather here has turned beautiful. Come Saturday the water from the faucet will be drinkable. Since everything else is working ok it would only stand to reason I would get a terriable throat infection, fever, and generally feel like crap. I'm on my second course of antibiotics but they don't seem to be doing much. There is this horrible MS "thingy" - when I cough or sneeze and move my neck forward quickly then horrible pain shoots through my shoulders and arms like I've been nudged by a cattleprod (not that I've ever been nudged by a cattle prod but I can imagine....) I am so ready for this to be over!

My DH says he that folks from work moved a business trip for him so he could be here for a meeting on Monday (he was to leave tomorrow) but I think he didn't want to leave until I was doing better. He gets hubby-points for that. When I am better that equates to a pan of brownies and some Kung Pao Chicken.

Posted by YankeeQuilter at 8:30 AM 17 comments: 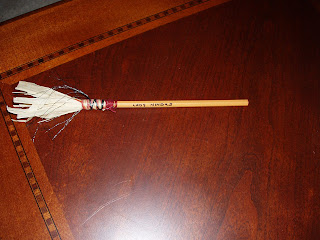 First the good news...my copy of The Deathly Hallows finally arrived, though a bit worse for wear, on Friday night. I read it over the weekend! It was really good. It is my second favorite of the series (First is still the Order of the Phenoix.)

The photo is of the craft project I did with the kids at the library during the summer reading program. They each made their own broom-pencil. Quick, easy and inexpensive...oh ya, and the kids seemed to like them. Hits all the major points! (I found the directions on the net and apologize that I cannot remember where?!)

One of the things I love about living out in our village is all the fruit trees around us. 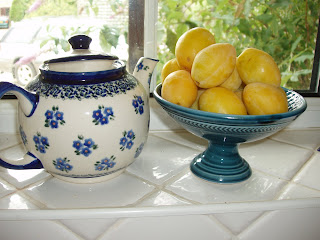 We have several plum and apple trees. Growing up in New England I have no problem finding uses for the apples. the plums are a different story. I've never seen nor cooked with this type of yellow plum. My gardener called them "egg plums," which I googled and got very little. I used some to make a plum crunch this weekend. They smell wonderful when they are blanching. The crunch came out OK but how much of that can you eat! Does anyone know of any other recipies for this type of plum?
Life is pretty much back to normal here after the floods. We still have to boil water to wash the dishes and drink bottled water but after all we have been through that isn't such a big deal!
Today I am determined to get back to sewing. I'm putting together some backings to try and finish up a few projects. Boring but necessary. If I can finish those I may let mayself play with the red, white and blue cowgirl blocks!
Posted by YankeeQuilter at 12:12 PM 13 comments: 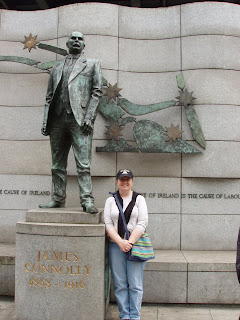 We took a few days away from the "no water" craziness and jumped over to Dublin for three nights. I had not been to Ireland for about 12 years...boy has it changed! There is a lot of new money in Dublin. When they say Celtic Tiger they aren't kidding!
I was very impressed by many of the new Irish designers. If you go to Ireland you must go to the Kilkenny design...really nice. I also went to see the book of Kells and the long room at the Trinity library, the National Gallery (love that place,) and took a 1916 Revolution tour which was really entertaining and informative. Finally we drank Guiness at least once a day...it tastes so much better when it is poured in Ireland! The photo at the top left is me in front of the statue of James Connelly (one Irish rebels of 1916...it has a bit of a Leninist look to the statue but since Connelly was a bit of a socialist himself I guess it fits.) 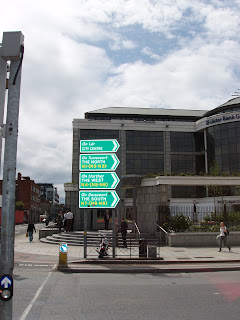 The second photo is of some street signs that just made me laugh...Dublin isn't the best for signs so if you go definately get a map! Note these signs show you can go North, West, and South all at the same time!

On the water-front...we have some water only we still can't drink it! It may be a few weeks before the water is clean. They have done a good job of keep us informed and supplied with water so I have no complaints.
Posted by YankeeQuilter at 5:46 PM 5 comments: