Lights are back on! 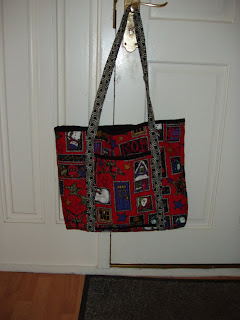 Well after several days of intermittent power outages it seems as if we are all fixed now...I'll know better after a good rain! I've been able to plug in the computer and the sewing machine. Life is almost back to normal...

I finished a Christmas tote bag. The photo is at the top. It worked up quickly and I used it already when we visited the local Christmas market this past weekend. I still want to add a hook to put my keys on but that can be done later.

I've started making my Christmas cookies...today coconut biscotti and peanut butter shortbread. I'm still a bit tired from Thanksgiving so it is a slow start. As you can see in the photo below Macbeth, my official floor cleaner, got a bit tired out by turkey three. 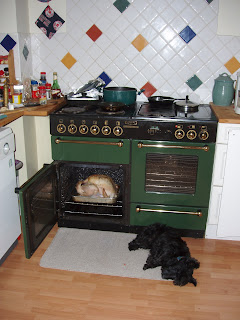 I tried a new recipe yesterday - Bourbon Apple Pecan Bread! Really good. I brought it to Choral practice last night. The recipe either came from Country Living or Home Companion. It was in my 'try it someday' pile of recipe cuttings but didn't look very old (some are a bit yellow around the edges!) I love bread recipes that make two loaves. It makes it feel like less work somehow when you have so much to show for the effort!
Posted by YankeeQuilter at 10:28 AM 19 comments:

What is it about me and water...

Sorry I have been off-line for a bit. We are having electrical/water problems at our house right now and my DH was adamant about not plugging in the computer until it was all settled. It was a very long process but I am happy to say we now have gone almost 20 hours without the switches flipping in the control box...keep your fingers crossed!

So this is my 200th post! It took a bit longer than I expected to get this one up there. The winner of the 200th post package is (drum roll) Dawn! Congrats. The librarian helped me out by pulling the name out of a paper-bag...not very classy but it worked. 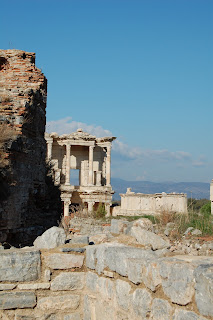 I have not been quilting too much this past week. I cooked three turkeys - one for each of the Thanksgiving meals we were invited to. (Mac is one happy dog...he does a great job of cleaning the floor when I am carving turkey!) On top of it all I got my flu shot last week. It hasn't been too bad but all of the MS symptoms have sort of been tugging on the peripheral...problems with my eyes, cramps in my legs...yada, yada, yada. More frustrating than painful to be honest. It does make sewing tough though. Hopefully next post I will my quilted bag finished.
Posted by YankeeQuilter at 10:08 AM 7 comments: 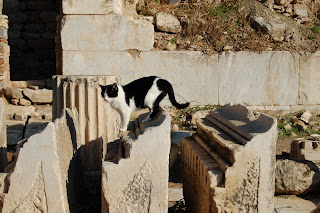 I was looking through my quilt room last night trying to figure out what to put together for my 200th posting "prize." (don't worry I am out of gurgling cods....) I think I finally have something that just about anyone would like - fabric! So if you comment on this post before Monday morning (England time!) I will put you into the drawing! What could be easier than that!

Now this will be primarily a post about cats...Italian cats, Greek cats and Turkish cats. Though to be honest they all pretty much meow'd alike! The cats in Turkey seemed to be so accustomed to Tourists they posed on the ruins! The ones on the islands were friendly but harder to catch with the camera. 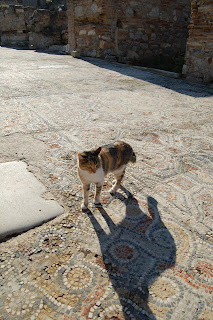 Wasn't it nice of this one to point out the mosaics for me!! 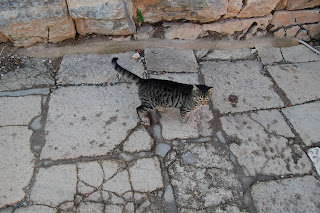 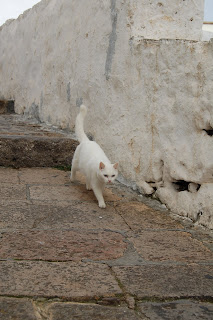 The white cat above followed us all around the monastery at Patmos. I feel a med-cat quilt coming on.....
Posted by YankeeQuilter at 8:22 AM 25 comments: 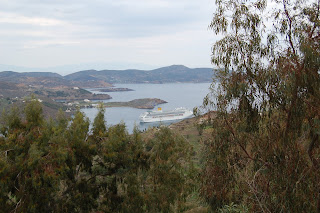 It is a statement on a vacation when you are as happy as I am this morning to be home again! My DH and I took a cruise around the med this past week. Between the rough seas, canceled excursions, not so great food (on an Italian ship!!!), and a missed flight home it wasn't the vacation we though it would be! 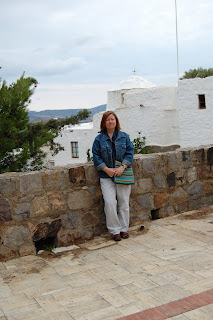 We did have some good days though! We visited Patmos and toured the cave where St John was exiled. The photo of me at the top of this post was taken outside the cave. That evening we had a great meal in Mykonos. 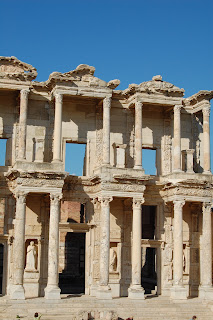 I really liked the tour of Ephesus in Turkey. The ruins were amazing and the tourguides very organized and able to handle the crowds well. The cats or course were very well photographed. They may require a post all their own! My DH was getting a bit aggravated with me since I stopped every time I glimpsed a feline...which in the ruins is often! 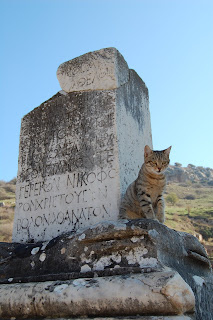 OK, I added just one of the many cat photos. This kitten looked so much like my Brownie that I couldn't help but slip her a few treats. (After Patmos I thought to wrap up some fish from breakfast in a plastic bag so I had something to give the cats...DH claims that is why they followed me all around the site...could be right!)

After Izmir the weather turned nasty. Really nasty! Fortunately I travel with a small pharmacy in my bag so I was able to stay ahead of the sea sickness! The dining room was half empty the next two evenings so I think I was one of the lucky ones! 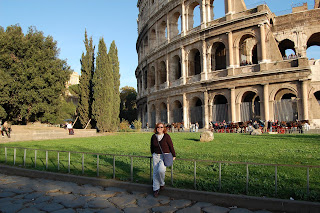 We arrived at our final port in Rome about an hour late. It was the worst disembarkation I have ever experienced on a cruise! No information and it took forever. We ended up missing out flight home by about 20 minutes! We couldn't get on another flight until the next day so we got a hotel and took the metro into the city. We did a bit of sight-seeing and got a really good Italian meal (finally!) We were both tired though and by the next day we were happy to be home!

While on vacation I finished The Interpretation of Murder by Jed Rubenfeld. It was a very interesting read. The first 50 pages or so are rough but once you get into the story it holds up well. It is a murder mystery set in New York circa 1909 and uses Sigmund Freud as a central character. If you like any of E.L. Doctorow's novels or Devil in the White City (can't remember the author) then you would like this book.

Today I get back to quilting. It will feel good!
Posted by YankeeQuilter at 10:40 AM 12 comments:

The continuation of the Gurgling Cod....

This morning it was cold and foggy...tonight it is cold and foggy but I digress. My DH and I got up early to hit the weekly boot sale in hopes of finally finding a gurgling cod for his co-worker. By the time we had walked down one aisle we were both frozen. It was getting colder instead of warmer as the sun came up (if it ever came up today?) So we split up with a plan to meet back at the donut van in 45 minutes. He went to the back of the parking lot to work backwards and I continued on my route. Within 5 minutes of his leaving - bamm - a medium green medium size cod! With that in my bag I then had 40 minutes to buy important things like buttons and an old singer gadget. When I got to the donut van there was my DH triumphantly waving a bag...he had a dark green medium size cod!!! We must have hit a school of them! Anyway, these end the search and hopefully meet all our "cod obligations." (if this totally confuses you see my post from about 2 weeks ago!)

I was trying to post photos but my blog connection isn't cooperating. More later!
Posted by YankeeQuilter at 4:44 PM 17 comments: 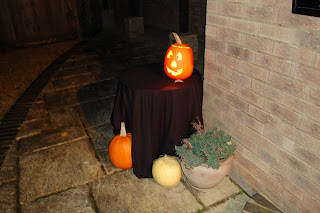 As expected I still have a lot of Halloween candy left over. I am amazed how polite the children were last night. I told one group they could take more and the little vampire replied, "my Mum says we are not to be greedy." I tossed a few more candies in his bag.

The remainder of the candy went into work with my DH today. I started losing my diet resolve last night and don't need the temptation on the sideboard! I'm going to wait a few days before taking down the decorations. I don't really have Thanksgiving decorations and my Dh complains 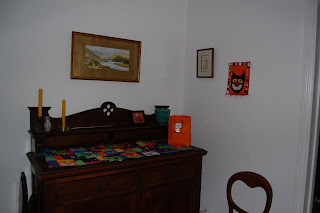 if I put up my Christmas decorations too early....(though I can't get him to define what too early really is!)

Today is a clean the house day...yikes. I also have to box up some Christmas gifts that have to be mailed half-way around the world. Ever feel like your to-do list is multiplying all on its own! If I dont' get some of it done however I can't go to the quilt show tomorrow up in Malvern tomorrow (incentive!)
Posted by YankeeQuilter at 8:27 AM 9 comments: