I feel as if I haven't posted anything quilty in a a long time...vacation can do that to you...also, I am trying hard to finish an applique block for the guild donation quilt. It just isn't talking to me. I think I have un-stitched each leaf, cherry, and stem enough to have made an entire quilt top! It is due tomorrow morning at 10 am...my applique standards have dropped accordingly!

Yesterday I went to my local guild's quilting bee. By the time I got there the heat (100 degrees according to the bank sign) had already wiped me out. I did help vacuum clean the centennial quilt the guild made for the town which is going to hang in the brand new government center. 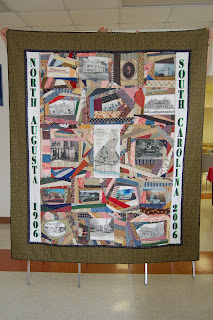 The quilt has several photos of well know landmarks around the city that were transferred to fabric as well as an early map of the city limits. Crazy quilts were still very popular in this area around the turn of the century so we decided to follow early quilters lead when we designed the quilt. It was also and easier way to incorporate the varied sizes of the photos...The local art association is very supportive of the guild and helps with advertising and set up of our quilt show. 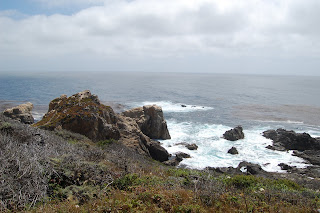 I have been playing with my California photos...those that I am not happy with "out of the camera" I like to edit a lot in Picassa to see what I can do with them...the one above I added glow tint to so it looks like we had blue skies.

The one below is the same spot but I first used the sephia (spelling?) option then added the aqua tint to make it look like an old postcard. I can spend a lot of time playing with what are sort of boring photos! (time I should be spending finishing that %&@# applique block....I think I raised procrastination to an art form on this project!) 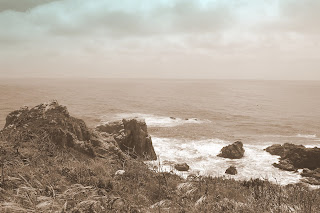 Posted by YankeeQuilter at 5:26 PM 9 comments: 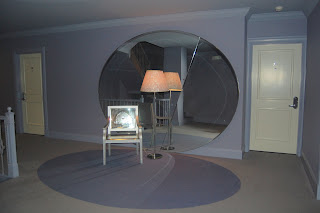 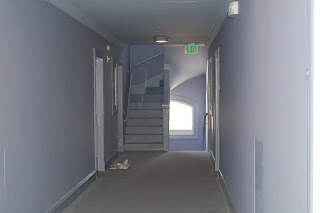 We got back late last night (or was that early this morning?) from our California vacation. It was great seeing my DH's family but I have to say I am exhausted. 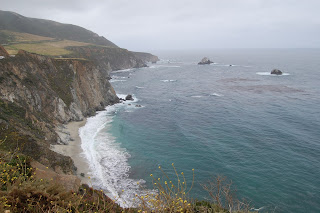 In one week we visited San Jose, Lake Taho, San Francisco, and Carmel. A lot of territory with a lot of golfing and family get togethers. Fun but exhausting.... 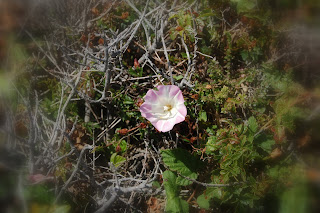 While walking the beach we came across this seal making his way back to the water...the bay was foggy every morning which made it possible for me to spend time on the beach! 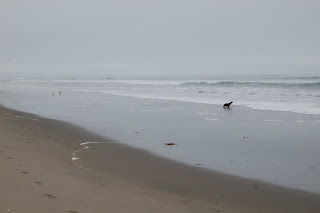 And this hawk swooped past the deck every afternoon.... 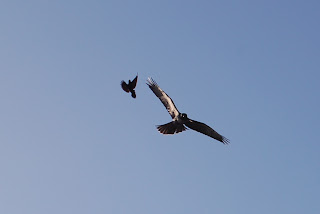 The weather was wonderfully cool...glad I missed the heat wave back here in Georgia the past week. The yard is a jungle that I will have to deal with later...where do those weeds come from and how do they get so tall in only ten days? 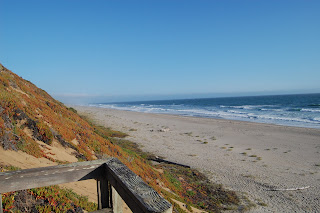 Posted by YankeeQuilter at 11:05 PM 9 comments: 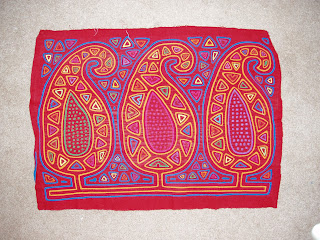 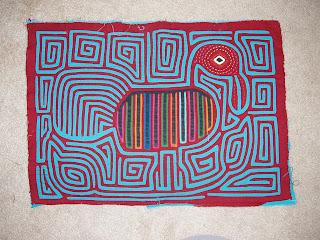 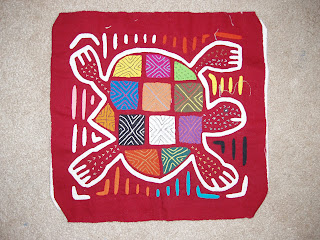 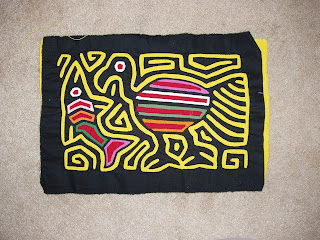 (Molas from Panama)
Posted by YankeeQuilter at 6:05 PM 13 comments: 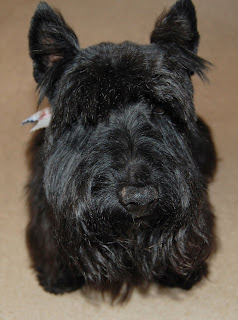 Yikes the thermometer spiked today back up to the mid 90's and I'm feeling it! Good day to stay inside and sew except it was Macbeth's day to go to the groomer and get his summer cut! 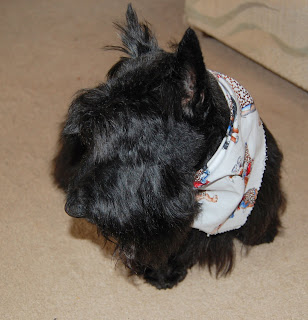 He looked better when we got to the car...immediately upon arrival at our yard he rolled across the grass messing up the beautiful job she did on his eyebrows and beard. I had to take a photo quickly since that bandanna had an expected lifespan of 10 minutes...he is not a dress up dog! Last I saw Brownie was dragging what was left of the bandanna to her fabric hiding spot behind the couch..... 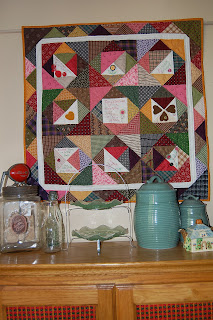 I finished...and I mean a real honest to goodness finish...my folk saying wallhanging. It has a binding, a sleeve and a label! whoo hooo...now I just need to trim the dowel and it is done! This is hand pieced, hand embroidered/embellished and hand quilted. I think this came from a primitive gatherings book...I gave the book away before I left England so if anyone recogizes the pattern I would appreciate some help. I like to give credit where credit is due but that takes organization (I do know the booklet is at least 8 years old and had a garden angel on the cover.) 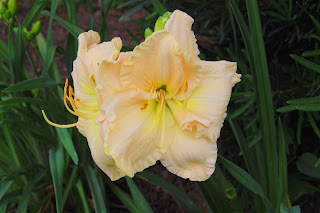 More daylillies are blooming....sigh....aren't the ruffled edges of this one so dainty...you wouldn't know that earlier this year the plant was run over by a lawn mower...
Posted by YankeeQuilter at 10:47 PM 16 comments:

Sorry about the posting lapse...seems there was a price to pay for the all the energy I had last weekend and it was paid with the last few days in bed. Still...it was worth it! 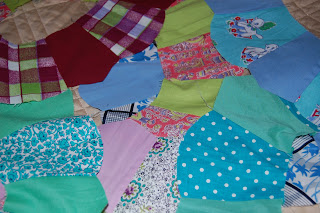 I have continued washing, sorting, and airing (though not usually in that order) the vintage blocks donated to our guild. These are going to be put into sets and sold on the silent auction table. These plates have some fun fabric in them and are over 20 inches across! They would be cute with some embroidery or applique done in the center or cut apart and used for arched borders (saw something like that in a Fasset book....) The problem with taking care of these blocks is I start planning projects with them....like I need more projects! 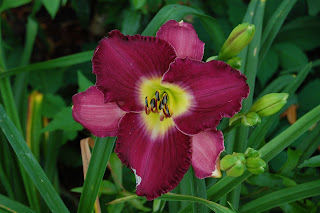 On a gardening note our daylillies are in bloom. I think it was General Lee who said "daylillies are the sign of a lazy gardener." Lots of color with little work...like there is something wrong with that?! I don't think they had as many varieties back then though. We have them in everything from pink fluffies to an very old double orange (given to my by a fellow quilter!) 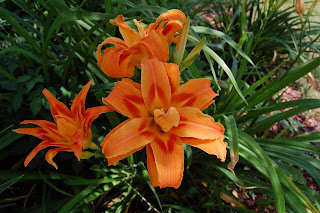 I also have some very small apricot ones with sweet faces.... 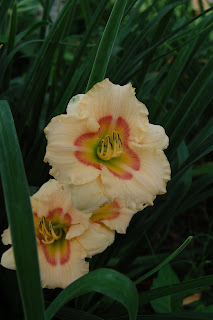 Posted by YankeeQuilter at 4:05 PM 11 comments:

Wouldn't you know it I forgot my camera last night so no photos of guild show and tell...sorry! I did finish quilting my Favorite Sayings Wallhanging and started binding it...just have to hand sew it down on the back now. 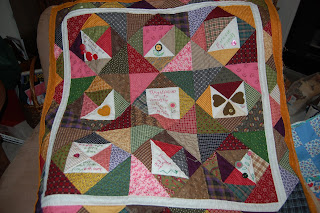 This will be a binding month for sure with two king size quilts and this wallhanging to finish! I have to admit sewing binding is my least favorite part of quilting. I once had a quilt quilted and then let it sit for almost 5 years in my sewing room before I put the binding on...so bad. So I'm thinking if I focus on finished one a week during the month of June I should catch up. I'm also hoping that putting it on my blog is sort of like stepping on the scale at Weight Watchers...it will make me focus! 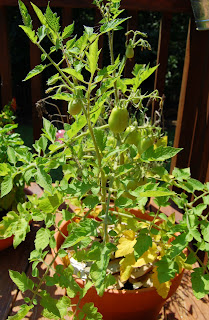 It is hot, hot, hot out now. Tomatoes are doing well but that is about it. Something ate my pumpkin plants down to the roots last night. Guess I'll be making a trip to the farmers market this October....

Good news, the foot has almost healed up from it's ant attack. Bizarrely, since the attack my MS spasms have stopped. Not sure why but hey, I'll take it! Here's hoping it lasts!
Posted by YankeeQuilter at 4:24 PM 8 comments:

My mailman was happy that I was happy today (picture me jumping up and down when he arrives with two squishies and a big box)...nice break from delivering bills he said. 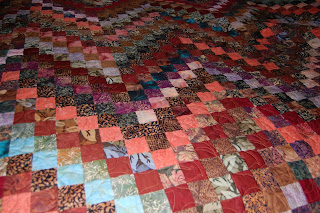 My Scrappy Bargello - Vale of Evesham is back from Judy Lockhart who did a great job with her longarm. There are vines and leaves in a pale peach which gives it just enough texture on an already busy quilt. This is a Bonnie Hunter pattern started on a superbowl weekend - really had fun making it. I am working on making some binding right now for this one. Whoo hoo, I stand a good chance of having two large quilts in the quilt show in October!

The next is my "king of log cabins" which was a leader and ender project that just kept on going (but the basket of 1-1/2 inch strips never seemed to go down? Quilter physics?) I am bringing them with me to my quilt guild meeting so I can get some photos...that is if I can get Brownie to move.....) 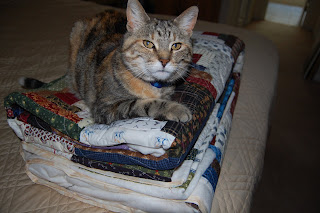 No photos yet on the squishies...one is from Victoria at Bumble beans with a couple of embroidery blocks to finish up. She is making me some very fun words (maple scones and cupcake) for my Bakery Memories Quilt!

The other envelope held a couple of fatquarters from a quilter I met up in North Carolina at the quilt shop. She was looking for some old Moda Folk Art Wedding fabric that I happened to have in my stash so I sent it to her last week. (that gives you an idea of just how long the fabric stash has been building...I bought that before I was married and we celebrated our 10th anniversary last week!) Amazing how things work out!
Posted by YankeeQuilter at 6:17 PM 13 comments: