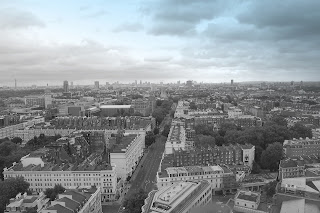 We went up to London for a few days. My Dh is starting to say "this is our last chance to..." about every hour! So we took the Bank holiday weekend as a last chance to see a couple of show at the west end (Jersey Boys and Mousetrap) and to get some good Greek and Middle Eastern Food. 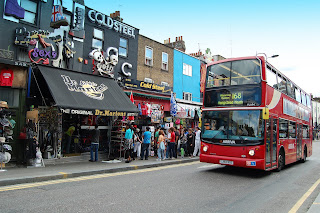 Saturday was my day to go to the markets. I went over to Portebello Road early. This is an interesting antique market but don't expect any deals there! It was very crowded and I left earlier than I expected which was OK because that ment I was in time to meet my DH at Camden Market. 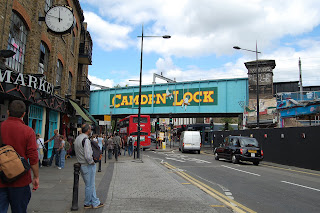 The last time we went to Camden was at least 8 years ago. We haven't gone back because my DH was noticeable uncomfortable with the Goth/Punk atmosphere. This time he had no problems - it has been yuppified. There are still elements of the old Camden yard but they seem a bit "Disney-d." For instance there was only one guy there with the shabby leathers, florescent pink mohawk, and torn t-shirt...he was a poser. For a 1 pound coin you take his photo...the Camden equivalent of Mickey Mouse. (He also had not tattoos and no piercings...wimp!) Not just the atmosphere has changed but the things for sale were 80% imports from the far east. Many of the stalls were just repeats of stalls on the other side of the market. The stalls inside the Canal building are much better and the food stalls in the courtyard next to the canal are wonderful. (best to go there hungry!) Interesting that sometimes the prices in the shops along the road are less then in the market...and that is with my DH negotiating.

So my advice for Camden is to go on a Saturday. Hold onto your money until you get to the stalls inside the building. There are some good crafts there but do not expect any antiques like most of the webpostings promise. Also, wonder the small food court before deciding what to have for lunch...there are lots of great choices! (My Dh had Lebanese and I had Ethiopian goat curry followed by a cappachino and French puff pastry! Calories don't count on vacation...) 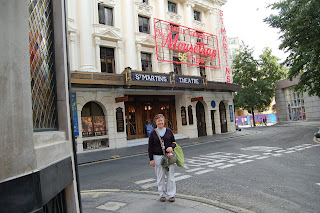 That afternoon I went to the National Gallery. It was wonderful I love Van Gogh so seeing another of his sunflower paintings is always exciting. They have so much more energy when seen in real life. The paint is so thick and has so much texture. Right now I can see oranges, yellows and greens better than reds, blues and greens so the sunflowers really seemed to glow for me! We had really good Greek food at Jimmies near the theater. 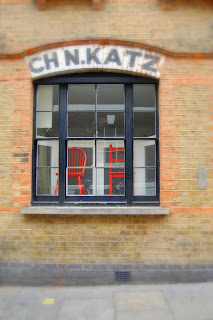 Sunday we went to yet another market! This time to Spitalfields and Brick Lane. These I strongly recommend! Lots of crafts, young designers and vintage clothes. The food at the Brick Lane was again really, really good. I ended up buying a trench coat, a belt, and a pocketbook. I would have bought more if I was about 4 sizes smaller....I did love the red chairs in the photo above. I took about 8 photos and have been playing with them on Picassa. 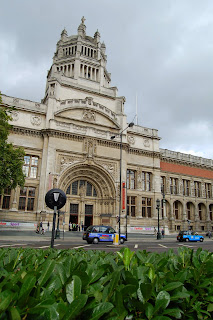 There was an Olympic handover party we made a showing at but I cut out early to spend a few hours at the V&A. 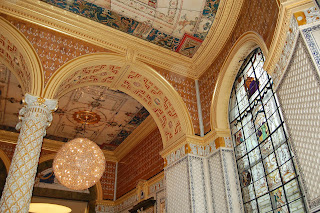 The tearoom there is one of my favorite stops in London. Each of the three rooms was decorated by a famous designer (including William Morris) and are just wonderful eye candy...the almond croissant isn't bad either. (Ok, I have given up on fitting into any of the designer clothes....)

That night we just had dinner at a little place in China town. Then I went back to the hotel too exhausted to see any more...

Today I am home resting...needless to say I overdid it the past few days. Too many "my last chance to...." finally wore me out! Lots of inspiration though. I filled dozens of pages in my dream book and took lots of photos.
Posted by YankeeQuilter at 9:11 AM

Ohhh the V & A. I hoping to get across at Christmas again this year - Mum not very well - and hoping to get up to London and to the V&A On My Own!

Have you got much left on your "To See" list? Do you think you'll make it down to Charleston and Sissinghurst?

Thanks for the tour! I had high hopes of traveling to London in Sept. but it is not going to work out now. I still have hopes to make the trip next Spring or Fall. My fingers are crossed!

Siobhan - if you still have time, try and get to Amsterdam while you're in Europe. The Van Gogh museum/gallery has dozens of his paintings

I have a feeling I could spend a week in the V&A and still not be satisfied. Maybe in my next life I'll get over there...

Wonderful photos and details. Thank you so much for sharing. Some day I hope to travel overseas, but who knows. I have added you to my favorites list because you seem fun and outgoing; a neat person to visit on the blog stops. Thanks again, rest well.

Wow! You did so much when in London. We were there at the same time, BUT I had 2 small kids in tow so just managed the Natural history Museum and the Aquarium! Maybe next time LOL
ps, you won some scraps! (pls send me your snail mail addy)

Keith just told me that he's going to London in September - we looked briefly at me going with him but since I'm going to Copenhagen in October I'm going to have to pass.

I traveled with him once before to London and we had a great time.

What a lot you crammed in! All the best places too, the V&A, National Gallery, Brick lane and Camden Lock and two West End shows! London is a great place (to visit!).