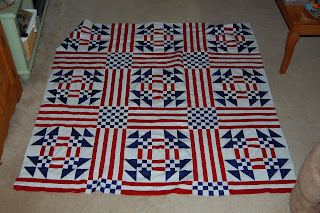 Today was another unpacking day...this is getting a bit monotonous no? I did make some headway in the sewing room and hang curtains in the bedroom. That all just about wore me out...I hid in the kitchen for a bit making a huge batch of Beef Barley Soup. It has been a rainy day so it felt right.

Above is my husband's Red, White and Blue quilt I am determined to finish this year. This quilt has gone to one class, two workshops and multiple retreats. It has crossed the Atlantic (twice) and been lost once by Delta Airlines for almost two weeks (I guess I should have tipped the guy a bit more so it would stay lost....) I think I have procrastinated putting the three borders on because the next step would be to quilt it...it will be a pain to quilt. But, I am going to do this one way or another.....

The only excitement today was the neighborhood Tom cat has gotten a bit bolder...more like a peeping Tom. 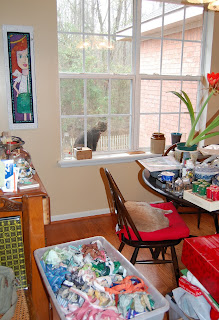 That is Goldie...sleeping on her favorite chair surrounded by bits of Christmas waiting to be boxed up and a box of fabric bits that I save for when I pack boxes. The Tom cat spent most of the afternoon perched on that window waiting for her to wake up and pay attention to him! 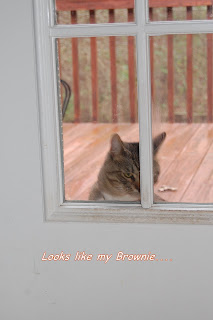 A couple of times in the past week I have almost let him in the back door thinking he was my Brownie...not sure how well he and MacBeth would get along!
Posted by YankeeQuilter at 10:48 PM

Beef Barley soup...I just might have to make a pot of that tomorrow. Thanks for the reminder!

Your husband will love the quilt no matter how many times it crosses the ocean! ;-)

Put borders on that beautiful red, white, and blue hubby quilt and machine quilt it. It has traveled enough around the world. It wants to be finished, please?

I really like the red white and blue quilt.I'd love to see how you finish it up.

I know this quilt has been so boring to piece, but it really is bold and wonderful. It's going to look fantastic when it's done. How do Goldie and Brownie react to the tomcat? When I was in Holland, Pluisje would freak out when her nemesis was in the yard.

Good Goldie playing hard to get!
Your hubby quilt has history. Now it most be told (shown)!
Lovely idea of beef barley soup. The weather around here is so cold. This soup will be a treat.

ooh your top is so pretty! Love it...and your feline visitor is too cute!!!

I love your red, white and blue quilt! You must make sure you finish it this year.

That is so precious about the neighborhood Tom Cat fancying your
Goldie.

It's cloudy here today. Calling for rain or a mix. I'm hoping SNOW. A pot of beef soup sounds perfect. When we get a good snow I always like a pot of vegetable beef soup--my mom, grandmother and great-aunt always made it too. Beef cubed, a beef bone or two, canned tomoatoes, stringbeans, butterbeans, corn, potatoes cubed,sliced carrots, onions and just before digging in add elbow pasta. I add any other vegs I have on hand and some garlic. Salt and pepper to taste.

Oh my gosh that's so cute. A real life peeper! That beef barley soup sounds yummy. But I still can't get over the Tom cat. He's so cute awaiting Goldies awakening!!!

I'm happy she's home and has her favorite chair though. That's a nice treat for a such a good kitty!

It's about TIME for you to finish that red/white/blue quilt!! *hehehehehe*

Love the pics of the Tom Cat...please come and play with me..he seems to be saying!

It's like a kitty soap opera...better than Eastenders :o)

Well ... that quilt seems to have some issues: YOU don't love it! Put the borders on it and send it out to be quilted? Let it talk to someone who will quilt it with vision?

I am almost done with binding one I waited and waited ... it never spoke to me! (Or I didn't hear it?!)

Soup is always good at my house. It is the bread and butter that gets me into trouble!

I wonder if my Tom cat does any window peeping. He is quite the rascal ...

Oh your DH quilt is wonderful! I love it!

You can do it!!! Your space looks so light and cheery. Been in that lighthouse!

Finish it! Finish it!! It will be grand!

How cute is that?, Goldie has an admirer coming to call.

That was an adorable photo of your peeping Tom waiting for Goldie to get up and go play.

I bet once you get your red, white and blue quilt quilted...you'll like it bunches and wonder what you were waiting for.

Well, when a guy sees a pretty girl like Goldie....what's he to do?

I am back for another instalment of the kitty soap opera. Has the peeping Tom cat succeeded in asking Goldie out on a date?

Thank you for your visit on my blog, advise and recommendations. It is very helpful and encouraging. Your words were so very kind!

I LOVE the red, white, and blue quilt! It is so striking. I think you will end up loving it when it is finished.

Keep those cat photos coming! Love those too.

I love hubby's quilt. I do hope you finish it this year!