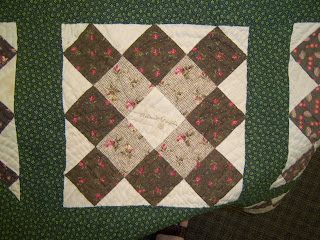 Like so many mysteries (or blind dates) this started out with a friend telling me of a friend of a friend. Seems this friend was doing genealogy work on her family and was given a quilt by her aunt. Her Aunt told her the quilt was made around 1890 and had her grandmother's signature on it. Very cool, right? The quilt has some great fabrics and is in fairly good condition but the signatures...well, she couldn't find her grandmother nor greatgrandmother. Her Aunt has since passed away so thus it became a "mystery quilt." 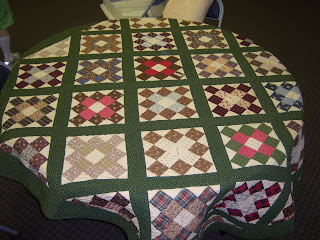 She brought this quilt and a couple of others that "maybe from the same maker" to our quilt retreat. I'm hoping we were able to find enough clues to help. 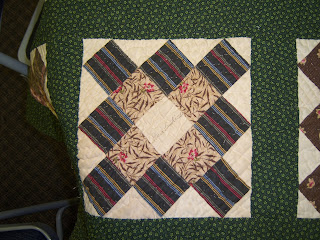 First, the signatures are all from Beech Island South Carolina which was a fairly well-to-do area prior to the Civil War with access to Charleston. After the civil war it became agricultural until textiles manufacturing moved into the area. Now it is the home of the Savannah River Site - a nuclear and power research station. Many of the surnames on the quilt can still be found in the local phone directory. The pattern is grandmother's choice set on point with sashing. The quilting is crude. The binding is front to back. The backing is muslin with a large flour sack that still has printing showing. 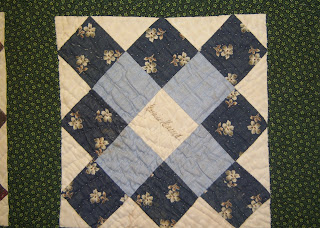 So there is lots of conflicting data in this quilt. Beautifully constructed blocks with fine fabric that looks to be circa 1860 paired with a later fabric in the sashing which is then roughly quilted with poor quality backing. (Also some of the blocks which have signatures were cut in half to make the setting blocks on the side!) All of this points to me that the blocks were put together at a much later date than they were made. Could be as much as a 30-40 year difference. Checked Brackman's "Clues in Calico" and she says it is not uncommon for album/signature blocks to be put together later by someone other than the recipient.

As to the other two quilts having a relation to this one. Doubtful. She was basing that on the green calico used in both quilts. The quality of workmanship is totally different and the calico though similar was printed by different mills. (more on those quilts later....) 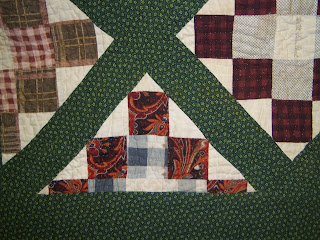 With that new date the owner was able to identify not one but two names that may be her relative (small town!) She is going back to the town records for prior to the civil war and try to match the names against the new time period.

So what do you think? I am open to suggestions on what to do next or if my dates seem off to you. Have you seen some of the fabric before and would date it differently? I, like my hero Sherlock, am an amateur detective but unlike him take input well!

She is also going to let us show the quilt at our Quilt show on the 16th and 17th. It is nice to uncover and share a bit of local history! 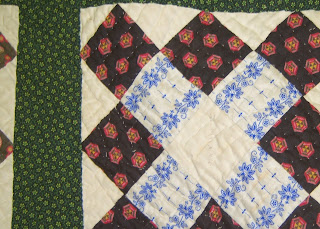 ps...check out the "fall-out shelter fabric" in this block!
Posted by YankeeQuilter at 2:14 PM

That fall out fabric is pretty wild!
Your a better sherlock then me... ;-) I wish I had more family quilts... I'd love to have that sort of mystery to search for! but since I have my own mystery, like where did those embroidery blocks you did for me go to... I'm pulling my hair out trying to find them... maybe I left them at my house...

A wonderful post full of mystery here. A beautiful quilt of age. I do hope you get to solve the mystery. Brenda.

I loved looking at the quilt.

At first glance it looked modern to me (a very non-expert). I think it was that sashing.

Looking forward to seeing the other two quilt.

What is fall out fabric?

It sure looks like those fall out signs we used to see everywhere when we were young. Good detective work!

Sio this is so incredibly interesting to read. Thanks for sharing. I [of course] have nothing to contribute of assistance by I would like to make one comment on the sashing.

It reminds me of my neon green Jo Morton fabric I picked up recently. Meg's Bouquet or Crimson and Clover both really. Neat.

You are such a good detective. Isn't it fun uncovering mysteries?

I love that quilt but the mystery more! I read a while ago that an "antique" quilt is only as old as it's newest fabric. So maybe the quilt could only be considered vintage :) Thanks for sharing!