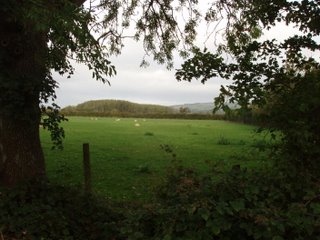 So much for going to the auction yesterday. As I was getting ready I let Macbeth out for a quick run in the yard. A few seconds later I heard him barking. I got to the door just in time to see him break through the fence. That's a terrier for you - too short to jump over, too hyper to dig under, so he just went full steam at it and whamm...a whole in the fence and a small black dog on the loose. To make a long, long story short - two hours later he comes popping up the drive smelling like I don't know what (but it wasn't nice..sort of like skunk or fox!) So my day was spent washing the dog, tending to a cut on his shoulder, and fixing the fence.

This is another photo of the route Macbeth and I usually walk. I went by there while he was missing but obviously he went the other way. For whatever reason sheep make him nervous so I felt pretty sure that he wasn't in the field bothering them but wanted to be sure!

Last night was the first rehearsal for a caroling group I've joined. I'm a bit nervous about it. I haven't sung in a long time but hey, it's caroling, how hard can it be? Well....first off, there are 14 people (5 men and 9 women) and we are doing harmony on almost all the pieces. Second, when we do sing it will be acappella. And finally, I don't recognize several of the songs. When they handed out Silient Night I was relieved - I know the Alto part for this one cold! Then she said we are singing it in German! O come all ye Faithful - Latin. Hello! What did I get myself into! I need a piano quick to do some fast practice! I can only use the broncitis excuse for a few more days....

Thanks for the feedback on the fuse/applique question. I made up some samples of the different methods on small potholder size pieces and will let them decide which way they want to go! I also pulled out Mary Ellen Hopkins's "It's OK if You Sit On My Quilt" and cut some 2" strips for the Triple Rail Fence to see if they would like to do that one next. Hopefully my husband will golf tomorrow so I'll have time to sew it together!
Posted by YankeeQuilter at 8:45 AM

What a gorgeous walking route. Lovely.

Sounds like you're settling in quite well...getting involved with different groups and all. That's terrific!

maybe macbeth was trying to find a new route to take you for a walk so he could avoid the sheep? :-)

I adore every picture you post - I must go there some day! I still can't believe you are lucky enough to be living there. I told my friend Kathi at quilt group - who has vacationed there twice - and she was totally green with envy, just like me.

Glad you got Macbeth back - your story makes me chuckle now but I'm sure you weren't chuckling then.

Sounds like a perfect caroling group to me! I love doing those things but haven't had a chance in years and years. In high school we sang a lot in German, Latin, etc. They don't do that now - so sad for the music students of today.

Oh that stinker McBeth! Wants to keep you on your toes! :)

I think that is great you joined the caroling group. You may not know the songs now but it will be fun to learn them! Wish I could sing!

Siobhan - I can't get over how well you're settling in - well done you. The singing sounds great - you'll be fine. As you say typical terrier - brute force and ignorance works every time - the smell probably was fox or possibly badger, they have loads in that area. I think triple rail fence will be perfect for your group - they'll be master quilters in no time with you at their helm :o)